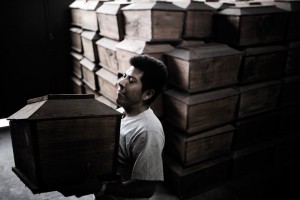 Guatemalan Forensic Anthropology Team working in a molecular biology laboratory (DNA lab) to identify tens of thousands of bodies of people who were killed during the hardest conflict in Central America. The lab is dedicated to the search for an estimated 45,000 Guatemalans who disappeared during the 36-year war. Drawing on technology used to identify victims of the Sept. 11, 2001, attacks in New York, the approach consist in the match of DNA from the bones of the victims with the DNA of the putative living relatives. In Guatemala, many of the disappeared were activists, union organizers, students and intellectuals who were labeled political subversives and communists by the military and national police. Taken from their homes or snatched off the street and killed, their bodies were thrown into mass graves or buried in the city cemetery, marked as «`XX.»