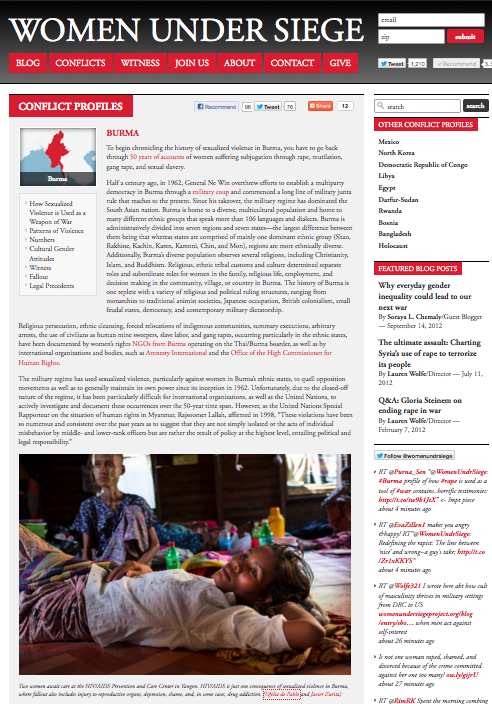 To begin chronicling the history of sexualized violence in Burma, you have to go back through 50 years of accounts of women suffering subjugation through rape, mutilation, gang rape, and sexual slavery.

The military regime has used sexualized violence, particularly against women in Burma’s ethnic states, to quell opposition movements as well as to generally maintain its own power since its inception in 1962. Unfortunately, due to the closed-off nature of the regime, it has been particularly difficult for international organizations, as well as the United Nations, to actively investigate and document these occurrences over the 50-year time span. However, as the United Nations Special Rapporteur on the situation of human rights in Myanmar, Rajsoomer Lallah, affirmed in 1998, “These violations have been so numerous and consistent over the past years as to suggest that they are not simply isolated or the acts of individual misbehavior by middle- and lower-rank officers but are rather the result of policy at the highest level, entailing political and legal responsibility.”

You can read the complete story here: Women under Siege Project. Lauren Wolfe/director